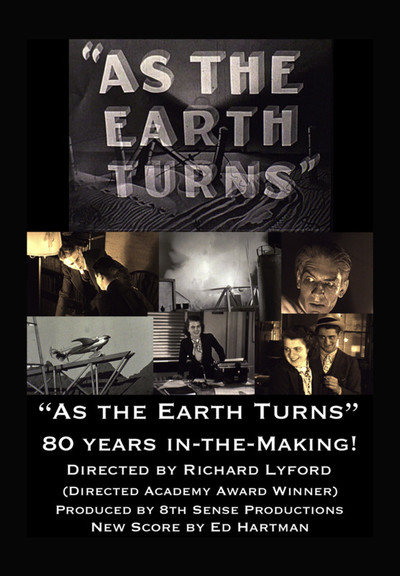 As the Earth Turns

Best Feature Film
"As the Earth Turns" (Unreleased 1938 film, available for the first time in 80 years!) Current list of Festivals, Awards and Nominations: http://edhartmanmusic.com/news/update:__festival_and_winners_list_as_the_earth_turns/ (Note: 5.1 Surround available for theatrical showing) In 1937, in Seattle, a twenty-year old budding filmmaker using his own equipment, had already created 58 plays and 9 never released, award-winning films. This director would go on to work for Disney Studios, and direct and edit a 1950 Academy Award Documentary. Richard H. Lyford’s films have developed a following among film-historians, since his early “amateur” films are some of the first “indie” films ever created outside of Hollywood. Lyford experimented with special effects, and models, and was becoming an excellent director. His final, and most challenging, film of this era was “As the Earth Turns”, his screenplay based on "The Man Who Rocked the Earth" by Arthur Train and Robert Williams Wood, 1915.. It was filmed in the Pacific Northwest, in and around Seattle. “As the Earth Turns”, is presented for the first time after 80 years of development! To finish his vision, a professionally mixed orchestral soundtrack, by NW film composer, Ed Hartman has been added to the presentation. “As the Earth Turns” is a 45 minute, sci-fi film that foresaw WWII, future-technology, climate change, and the extreme need for peace, as the world was drifting back into world war again. The main character, “PAX” (“Peace” in Latin), is played by Lyford, himself, a scientist who desperately wants peace. He uses climate changing science to keep mankind from war. The lead actors are both male and female. The lead actress, Barbara Berger (AKA Barbara Berjer) portrays a hard working newspaper reporter. Her strong character, “Julie Weston” leads the hunt for the villain all the way to the end of the film. Berger had a long career on Broadway and television (ironically including “As the World Turns”). The acting is dramatic, professional and realistic. Lyford used early homemade FX including controlled dynamite explosions and miniature models similar to those used in “Flash Gordon” (1936 Serial). His make-up work was excellent (he loved Lugosi and horror films) and his framing of the picture is mature and developed. Lyford was very capable of directing his acting troupe, as well. A legendary location in Seattle, “Gasworks” was used for PAX’s lair. The film has similar themes to “Things to Come”(1936), “In Like Flint” (1967), and even a little “Austin Powers” (1997). Some of the dialogue seems to come out of the TV series “Star Trek” (1966), and even “Dr. Strangelove”(1964). The film was shot in B&W, but the last scene was shot color for dramatic purpose, foreshadowing “Wizard of Oz” in 1939. “As the Earth Turns” is an example of a true “indie” film, completely shot outside of Hollywood. It is an amazing educational film for any filmmaker to learn from. This filmmaking had no sophisticated technology available. It has multiple-exposure sequences (including a very professional title sequence), “day for night” shooting, simple transitions, and intense editing between live action and miniature model sequences. Richard Lyford did his best with very limited resources. This film is a great lesson for anyone in media creation, today.

Richard Lyford was born, in Seattle, in 1917. Inspired by silent films and stage plays, Richard put on 58 plays and created 9 16mm films by the time he was 20 years old. He presented his live and filmed productions, with his own acting company, in a 50 seat basement theatre in his house.

His early attempts with film, especially 16mm gained the attention of Disney. Lyford worked on Disney films, including the classics, “Dumbo”, “Pinocchio” and “Fantasia”. He pioneered hi-speed animation, special effects and models.

In WWII, he was drafted by the army, and made films for the Army Air Forces. After the war, Lyford created his own films, and co-produced and directed the 1950 Academy Award winning documentary, “The Titan” about Michelangelo.

In 1952, he went to Saudi Arabia (the first Western film crew), and produced a number of films for the Kingdom. “The Fly” was a groundbreaking documentary about the prevention of the disease by the Tsetse Fly.

Other Arab based documentaries were created, but ran into protests due to the Middle Eastern War in 1956. Lyford continued to make films, including “Boy With A Blindfold” about sight restoration, narrated by Walter Pigeon. His filmmaking led him back to Disney to work in “The Wonderful World of Color on television and many other projects.

in addition to filmmaking, Lyford was very much interested in aviation. So much, that he bought a surplus training plane for his backyard. It would “taxi” all over the yard.

“So you see, it gets you! You can’t get away from it, and I know that as long as I have greasepaint behind my ears and developer stain on my best shirt, I’ll live a happier life.” 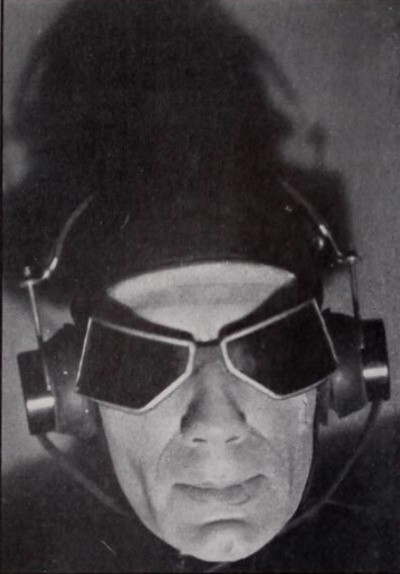