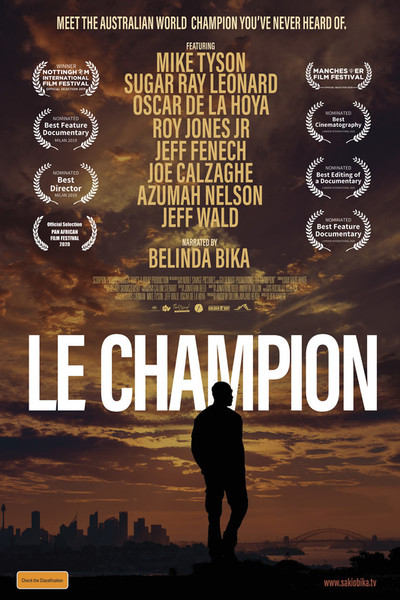 Le Champion is the story about the life and career of one of Australia’s unknown world sporting champions, Sakio Bika, this is a journey about poverty, prejudice, determination and one man’s quest for acceptance.

First time feature documentary Director Ben Damon started his career as a journalist and media television presenter. Over the past 17 years he has become the respected face of boxing coverage in Australia, which has led him to the incredible story of Sakio Bika. Ben is also recognized as an award-winning writer-director, having received international recognition for his short films.

Le Champion is an Australian boxing story -with the rhythm and romance of When We Were Kings, it’s the tale of boxer Sakio Bika, who fought out of utter poverty in his homeland of Cameroon,and battles for acceptance in his adopted home of Australia.

The documentary explores the pertinent issues surrounding the plight of African migrants to Australia and depicts Sakio’s 18-year struggle for that elusive world boxing title. Le Champion is a feature documentary filmed over five years across Australia, Africa, North America and the United Kingdom and is one of the most ambitious sporting documentaries in the history of Australian film. It features boxing greats Mike Tyson, Oscar de la Hoya, Azumah Nelson, Markus Bayer, Sugar Ray Leonard, Joe Calzaghe, Roy Jones Jnr and Jeff Fenech but is far more than just a boxing story.

This is a documentary about poverty, race, struggle and one man’s journey for love and acceptance. Through an extensive collection of archival footage, we witness Sakio’s arrival in Australia and early challenges of adapting his rugged, unorthodox boxing style illustrating Sakio’s super-human determination. And despite19 years of marriage to an Australian wife, and the birth of three distinctly ‘Aussie’ children, Sakio remains relatively unknown in the country he calls home. His complete anonymity in Australia is in stark contrast to the super-star status he receives in Cameroon, which provides some of the most startlingly uplifting imagery in the documentary, as the next generation of Cameroonians are inspired by Sakio’s will and determination.

The low-budget production has been one of passion for the past five years for director Ben Damon, a journey that has been supported by Indigenous writer-producer Andrew Dillon and producer Majhid Heath. The global nature and scope of the project has provided distinct layers to the story that have lent themselves to a compelling story structure, which is complemented by stylistic cinematic imagery from the lens of Director of Photography, Calum Stewart,and narration from the person who knows Sakio best…his wife Belinda.

As Australia shuns Sakio,he continues battling against the odds as an outsider in the world of boxing; will success help break down the racial barriers at home, and will his journey culminate in fulfilling Sakio Bika’s dream of winning the most sought after belt in World Boxing? 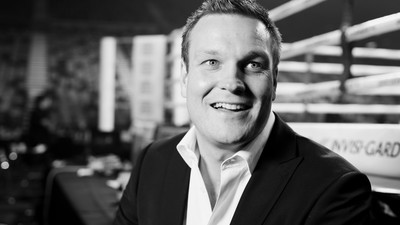